OFFICERS AND BOARD MEMBERS IN ATTENDANCE:

•AHS Board of Directors:

*President Tom Sutter thanked Peter Neal Peregrine for his wonderful presentation on Native Peoples of Northeast Wisconsin at the April meeting.
*Thanks were given to the Post Crescent and the Bargain Bulletin for their continuing publicity for the Society.

*Thanks also and loud applause to David Buss who each meeting does most of the setup and hands out raffle tickets to those attending.

*Thanks to John Marx and the Building and Grounds Committee for all their efforts in preparing our building at 128 N. Durkee Street. Now with the final approval of the City of Appleton we can be open to the public. Opening date not yet set.

*Last month we reported on wonderful donation by the Langenberg Family of $25,000 towards the Society’s building fund. The Langenbergs were early residents and business people in Appleton in the 1850s and one was a founding member of St. Joseph’s Parish. Marie (Langenberg) Vandenberg provided the donation.

*Regrettably Marie passed away unexpectedly on Monday, May1, 2017. We all extend our deepest sympathy to her family.

*Encouraged those attending to renew their annual membership if they haven’t yet done so.

*A reminder that two of Winston Churchill’s grandchildren will speak at Fox Valley Lutheran High School on Saturday, May 13th at 3 pm.
*The Neenah Historical Society has an exciting new display at the Octagon House. *The Door Prize was awarded to Mary Keller, who chose a Wishing Well Gift Certificate.

Reports of Officers and Board Members:

AHS Secretary James Richter gave a report on the Board of Directors research on prospective days of operation and business hours for our new museum and resource center. With counsul from ADI and Visitors and Convention Center management, we are looking at Thursday thru Sunday, 10:00 a.m.-6:00 p.m.

Abbie O’Toole was born and raised in Appleton, WI and is an Appleton East graduate from the class of 2006. Abbie received her undergraduate degree and teaching certification from the University of Wisconsin-Green Bay in 2011. Abbie has been teaching English and History at Appleton East High School since 2013. She is currently teaching the American Studies class which combines both AmericanLiteratureandUnitedStatesHistoryintooneblockedclassperiod. Abbie is also pursuing her Master’s in Education through the University of Wisconsin- Oshkosh while simultaneously planning for her upcoming wedding this summer.

Corey Otis graduated from Appleton East High School in 1993, and he has taught English Language Arts at his alma mater since 2000. Corey graduated from UW-Madison in 1997 with a degree in journalism; he earned his teaching certificate from Lawrence University in 2000. Corey's family has strong roots in Appleton: his father is the Appleton Christmas and Flag Day Parade Chairman, and his mother was a nurse at St. Elizabeth's Hospital for 42 years. His wife, Kristi, teaches first grade at Ferber Elementary School, but next year, Corey and his stepsons, Caleb and Eli, will all be at East together.

How we are looking back:

•Patriotfest May 20th (Corey and Abbie)

Power Point Presentation:
Appleton East Senior High School was built at 2121 Emmers Drive on Appleton’s south side to fill a dire need for more high school space. The school was designed by Peeples Architects and built by Hoffman Construction Company. East was built on the site of the former Emmers farm. Appleton’s now West High School was overflowing for many years. So on September 6, 1967, Appleton East opened to share the senior high school population.

The new school was a very unique design and with room for expansion. Features included a center school made of a round concourse (Silo) with classrooms circling the concourse. A north area housed school services including the office. Attached to the west of the concourse was a tech education and home education area. It also was equipped with a swimming pool. 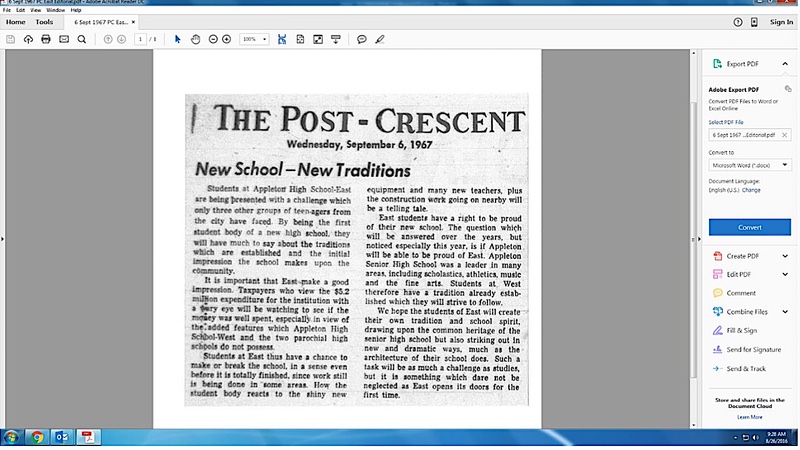 Cory is in charge of the 50th Anniversary Project for the school. With the help of Abby and their students they did extensive research into the school’s history. Past Year Books and other school files provided a wealth of information.

Key Points in the School’s History:

• Over the years many additions have been built on Appleton East Senior High School. A second gym was constructed as was an expanded tech education area. Also the property was filled with first class athletic fields.

•Class of 1992 did a “smiley face” covering the whole roof of the Silo to celebrate the school’s 25th Anniversary.

•Alumni of the school include Congressman Reid Ribble and Actor Wilhelm Dafoe.

•The school also has many noteworthy teachers, past and present. These include Ron King, Richard Pike, Pat Schwanke and Todd Janquart.

•Since the beginning the school has published a yearbook, known as The Lantern.

•They have published a 50th Anniversary book, which was just received. Copies are limited and extent of public distribution is not clear.

•The school newspaper is “The Courier”.

Major Events in the Anniversary Celebration:

• Last fall’s Homecoming was considered the start of the 50th Anniversary Celebration. Alumni were invited to join the Homecoming Parade. Alumni marched in 10 year groups. 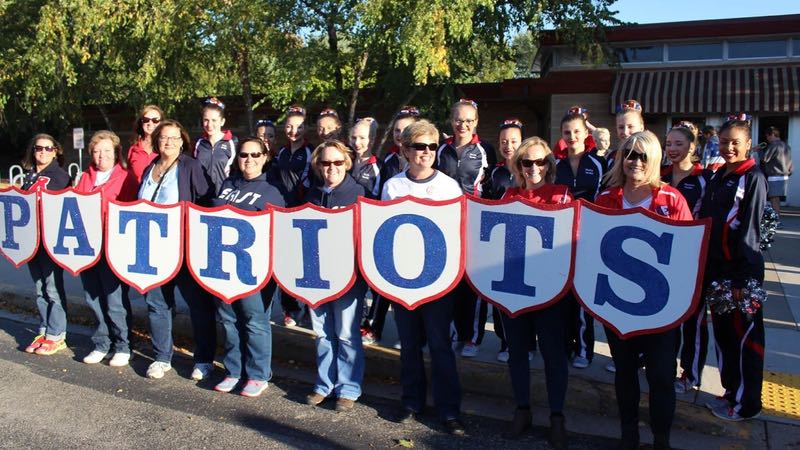 •The Committee and Administration installed a major project to beautify the school, but also to focus on school history.

•Have been polling students on “What does a Patriot look like?”. Have been getting some interesting responses, which will be displayed in school and published. The following are some of the answers: (1) Patriots play hard; (2) Patriots express; (3) Patriots are unique; (4) Patriots create; (5) Patriots innovate; (6) Patriots are dedicated; (7) Patriots celebrate diversity; (8) Patriots have pride.

•The school worked closely with the Museum at the Castle to display a Patriot Heritage Wall. 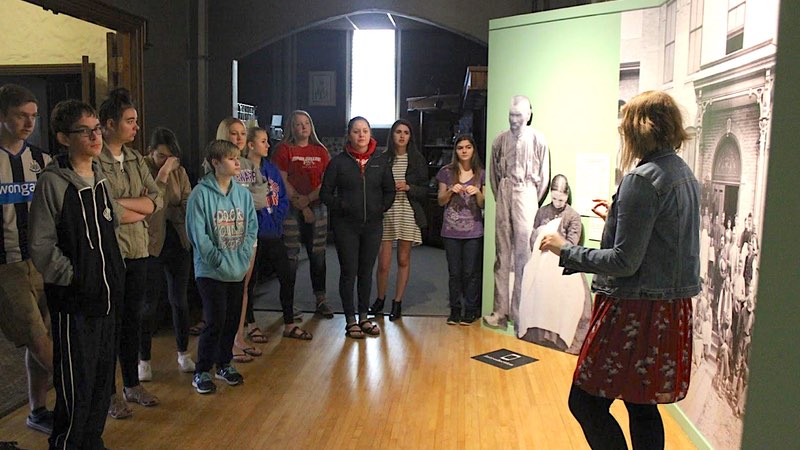 • Their major event to celebrate the 50th Anniversary will be Patriotfest to be held on Saturday, May 20, 2017. Free admission. There will be a variety of activities provided:

•Bands performing at Patriotfest will include several alumni who have been very successful and performed on both coasts: Green Screen Kids, Eminence, Greg and Dan Waters, and Rome de Luce.

•There will also be held 3 separate Class Reunions on the 20th: (1) All Staff; (2) Former Performers; and (3) Former Players and Coaches.

•“We see no better way to celebrate 50 years of Appleton East education, innovation, and inspiration than by forming an endowment fund to “pay it forward” to future Patriots.”

•“The endowment fund promotes initiatives that will directly benefit current students as well as enhance Appleton East values and traditions.”

•“Any Appleton East High School student, staff member, or parent may apply for a “Patriots
Pay It Forward” grant.”

•A committee of Patriot educators, community members, and students will consider and evaluate proposals.